We were sitting at the table crunching our cereal yesterday morning—the twelve year old, bleary in her mismatched pyjamas; the nine year old staring off into space; and the five year old—dressed in a red and blue polka-dot monster onesie, five clear plastic pots at his elbow. In the pots? Moths of course. 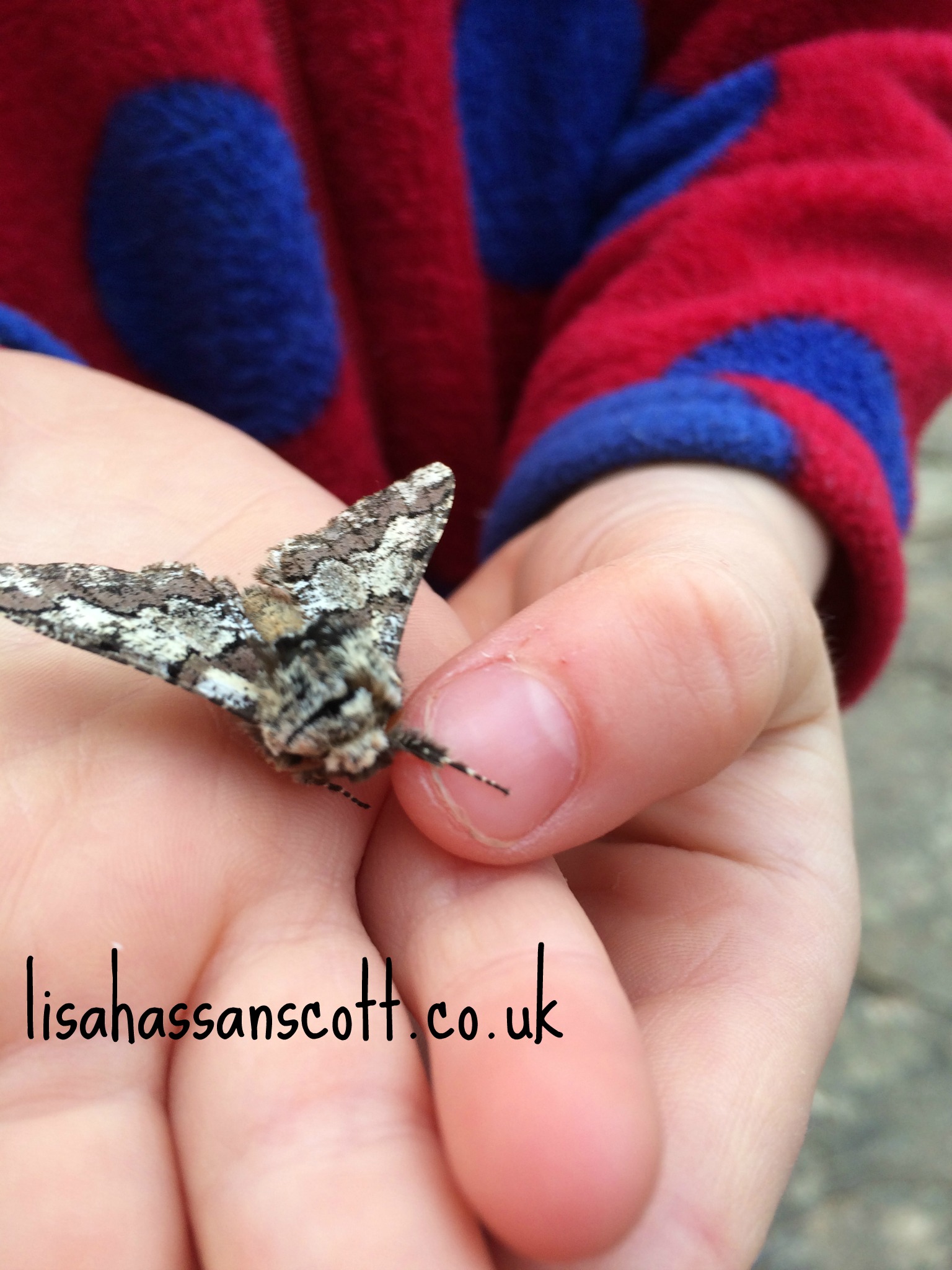 This littlest is not really one for sitting at the table. Back when the eldest was our only child, my husband and I had energy and attention and were able to encourage our daughter to stay at the table during meals by engaging her in conversation and keeping the meals to a manageable length. Now that we have three, I find myself racing around the kitchen, stirring pots, emptying the dishwasher, mopping up spills. I land the food on the table like an untrained jet pilot, then shout as loudly (and uncouthly) as I can, “DINNNNNNNER!”

People come running, take their places and sit down. I collapse into my seat because it’s been a long day and I’m just glad to have got another meal on the table. Already I’m thinking about the next meal.

I digress. What was I saying now? Ah, yes. He doesn’t sit at the table for very long. Breakfast time is eat-a-few-bites, build some Lego. Eat-a-few-bites, look at his moths. Eat-a-few-bites, forget about the meal until later when he might find the eschewed bowl sitting beside the sink, at which point, four hours from when breakfast began, he finishes his meal.

It’s not that he lacks the ability to concentrate. Sitting still isn’t a problem: he can sit quietly watching tadpoles, newts or caterpillars any day. It’s just that sitting down and eating breakfast is pretty low on the priority list. He’s too taken away with examining the moths he caught in his trap last night, in letting caterpillars crawl their sticky way across his hand, in building more and more complicated tracks for his cars. By the time his sisters pad down the stairs he’s been up and at ‘em for at least an hour or more, and he has important work to do.

Our practice is to put his moth trap out in the evening and leave it on overnight. In the morning, he goes through it himself and puts the moths into clear plastic specimen pots. Later, I help him identify the species he doesn’t already know, then he releases them.

Apparently breakfast time yesterday was the time to release a particularly beautiful little moth. As I sat in my chair, chewing idly on my granola, I saw a small grey smudge fly past the window. Following stealthily at a respectful distance was my little boy, his shining face watching its flight with a sense of intensity and awe that made my heart draw its breath. I felt as though I was witnessing a moment of pure wonder. Usually when he and I discover something beautiful we are elbow to elbow. Today I spied, through the pane, the miracle of my son marvelling at the beauty of the world.  As my son’s onesie-hooded head gently and persistently passed the window, in visual pursuit of this small, secret beauty, I witnessed what it is to feel awe. His awe for his beloved flying beauty; my awe for this small fluffy-haired boy.

I love ardently that he loves ardently. I take joy in his joy. I am full of wonder at his sense of wonder. I experience the world anew through my children’s sparkling eyes.

Like a bubble touching the earth, the moment popped and dissolved as the moth disappeared over the neighbour’s fence and my son returned to his other specimens. I laughed and said to the girls, “One day he’s going to have a beard and sandals.”

My eldest put her head in her hands, in all her almost-teenage intolerance of anything “gross”: “Oh noooo! He’s going to be weird!”

I replied, “Or maybe he’ll grow up to be ‘normal’ and wear a suit and sit unhappily behind a desk, looking at a computer screen, while secretly longing to be outside.” There was a pause while we all took that in.

“No. I don’t want that for him,” she said. Neither do I. So sitting down at the table and sitting still aren’t that big on my priority list either, I guess. Wonder is fairly high. Actually, it’s first.